The Company is focusing on African oil and gas opportunities with the key focus on short-term production opportunities. The exploration assets should be in proven areas of discovery with above average upside potential.

Licence area: 3 177 square kilometers
Licence period: Since 2012. The current exploration period of Block III is extended until July 2020.
Interest: Semliki SARL (“Semliki”) – 18.3%. Semliki is owned by Efora (68%) and DIG (32%). Efora's effective interest in the asset is therefore 12.5%.
Location: North-east part of the DRC, bordering Uganda.  The block is on the DRC side of the Albertine Graben Basin, which is part of the East African Rift System.
Nearest towns: Bunia, Beni, Butembo
Primary activity: Identification of the presence of a working petroleum system
Reserves and resources: Risked best estimate prospective resources net to Efora of 15.9 MMBOE (as at Aug 2017)
Partners: The DRC Government (15%) and DIG Oil (5.8%)
Geological features: The Albertine Graben is a Tertiary intracontinental rift that developed on the Precambrian orogenic belt of the African Craton. It forms the northern termination of the western arm of the East African Rift System. The available geological and geophysical data indicate that rifting could have been initiated during Early Miocene with the accumulation of thick sediments in asymmetric basins along the strike of the rift system. 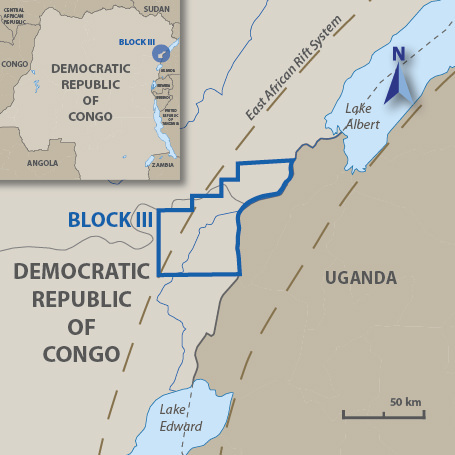 The current exploration period of Block III is extended to 26 January 2019.

Total, as the Operator, and the associated service providers have obtained all the necessary permits to complete the approved exploration programme.

Stakeholder consultation and engagement was completed. Mitigation plans have been developed and implemented to address the potential environmental and social impact of the exploration activities on the block.

The Albertine Graben has been the subject of sporadic interest for petroleum exploration since the early 1920s following the identification of a number of oil seeps in the area. In 1938 the first petroleum exploration well in East Africa, Waki-1, was drilled near Butiaba on an anticline defined by correlations between a series of 20 shallow surface boreholes.

The well-encountered basement at 1 221 meters but, more significantly, “oil shales” were found and an “asphaltic oil” show was discovered close to the basement.

The next significant activity was an aeromagnetic survey acquired over the Albertine Graben in 1983 – 1984. Subsequent gravity and magnetic surveys by the government were added to the database. In the early 1990s, Fina held an exploration license over the entire graben but relinquished the license before any significant work was done. Recent exploration commenced in 1997 when Hardman Resources and Heritage Oil and Gas were respectively awarded Exploration Areas 2 and 3. Heritage acquired 181 kilometers of onshore seismic in the Semliki area in 1998.

Commercial hydrocarbon quantities have now been established in the Ugandan part of the Albertine Graben. Discovered reserves are estimated at approximately 1 billion barrels of oil equivalent.

The change in the numbers reported reflects management’s view of the geological risk following the interpretation of the gravity magnetic data and other analogues and offset wells in the graben.

The Group has the legal entitlement to the minerals and asset being reported on and there are no legal proceedings or other material conditions that may impact the Group’s ability to continue operations.