<< Back to Financial Results

(Incorporated in the Republic of South Africa)

(“SacOil” or “the Company” or together with its subsidiaries “the Group”)

The Group’s income and financial assets are predominantly denominated in US Dollars. The weakening of the Rand, and the resulting increase in foreign exchange gains and foreign income receivable, significantly underpinned the financial results of the Group. In addition to the increase in income, the Group’s operating costs decreased by 43% primarily due to a reduction in the impairment of the Group’s financial assets. Consequently, for the year ended 28 February 2014, the Group reported a profit before taxation of R64.7 million (2013: loss of 29.3 million).

In the prior financial year other income included profit of R71.7 million on disposal Of exploration and evaluation assets, foreign exchange gains totalling R32.1 million, the break fee received from a third party of R7.9 million and various other income items totalling R11.5 million.

The decrease in other operating costs is a combination of improved cost management given the liquidity challenges faced by the Group during the 2014 financial year and the reduction in the impairment of the Group’s financial assets.

Interest receivable from EERNL contributed R103.0 million (2013: R37.6 million) towards investment income. The Group’s cash and cash equivalents generated interest income totalling R0.9 million (2013: R0.8 million). Interest accruing to the Group as a result of the unwinding of the time value discount applied to the Group’s financial assets contributed a further R26.7 million (2013: R8.5 million). The Group’s financial assets in this regard are the contingent consideration receivable, the advance payment against future services and the deferred consideration on disposal of the Greenhills Plant.

The increase in investment income is primarily attributable to the weakening of the Rand and default interest on the loan to EERNL at 2% per annum (compounded) from 1 June 2013, over and above the contractual interest rate of 30% per annum on loans advanced to EERNL. No additional loans were advanced to EERNL during the financial year under review.

The increase in finance costs is primarily attributable to the Gairloch loan which attracted interest for a period of seven months in the current year, relative to one month in the prior financial year. This loan was equity-settled in January 2014.

The Group’s other financial assets include the contingent consideration receivable from Total E&P RDC (“Total”) pursuant to the farm-out of Block III, loans advanced to EERNL and DIG, the advance payment against future services and the deferred consideration on disposal of the Greenhills Plant.

Foreign exchange gains contributed R105.4 million (2013: R25.1 million) to the increase in other financial assets. These gains arose on the translation of the US Dollar denominated contingent consideration receivable and the loans advanced to EERNL and DIG.

Interest arising from the unwinding of the time value discount applied to financial assets contributed R26.7 million (2013: R8.5 million) to the increase in other financial assets.

An impairment loss of R22.1 million (2013: R129.9 million) arising from the write-down of future expected cash flows from the contingent consideration receivable also off-set the increases noted above. The write-down was necessitated by a change in timelines affecting the receipt of the contingent consideration and is reflective of the time value of money.

A Rights Offer that was undertaken to recapitalise the Company closed at the end of January 2014. Total cash of R336.6 million was raised representing 59% subscription to the Rights Offer. At 28 February 2014 cash and cash equivalents include R273.3 million of these funds after the settlement of the PIC loan (R47.9 million) and the Group’s accumulated short-term liabilities (R15.4 million).

The Rights Offer proceeds noted above contributed R336.6 million towards the increase in equity. The equity settlement of the Gairloch loans contributed a further R238.5 million. SacOil also raised R0.7 million by way of a general issue for cash during the financial year under review.

The Group’s profit for the year increased shareholders’ equity by a further R9.5 million.

The Group experienced significant liquidity challenges during the 2014 financial year and was unable to settle foreign taxes payable. As a result taxes attributable to disposals by the Group of exploration and evaluation assets and the declaration of dividends in prior financial years remained outstanding and continued to accrue interest during the 2014 financial year. Interest on taxes outstanding amounts to R21.4 million (2013: R36.9 million). Foreign exchange losses total R47.5 million (2013: RNil). The foreign taxes are denominated in US Dollars.

The Group’s current tax charge for the year is R14.0 million (2013: RNil). The Group’s profit for the year was primarily driven by foreign exchange gains on transactions with non-connected parties and interest receivable from EERNL.

The Group’s investment of R63.2 million in the Botswana licences, OPL 233 seismic costs, property, plant and equipment and intangible assets, off-set by the cash inflows from the Group’s loans and receivables of R14.8 million (primarily the part payment of R13.8 million of the EERNL loan), resulted in net cash used in investing activities of R48.4 million (2013: R0.9 million).

The Rights Offer proceeds of R336.6 million, together with the increase in the amounts owed to Nigdel and EERNL, resulted in net cash from financial activities of R355.9 million (2013: R101.5 million). 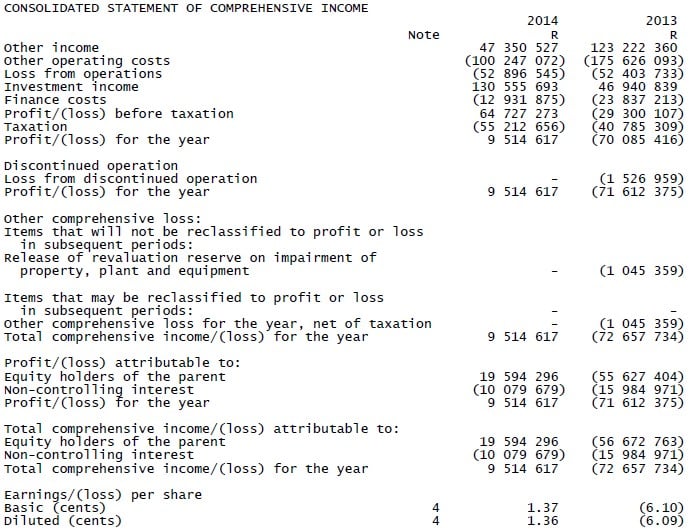 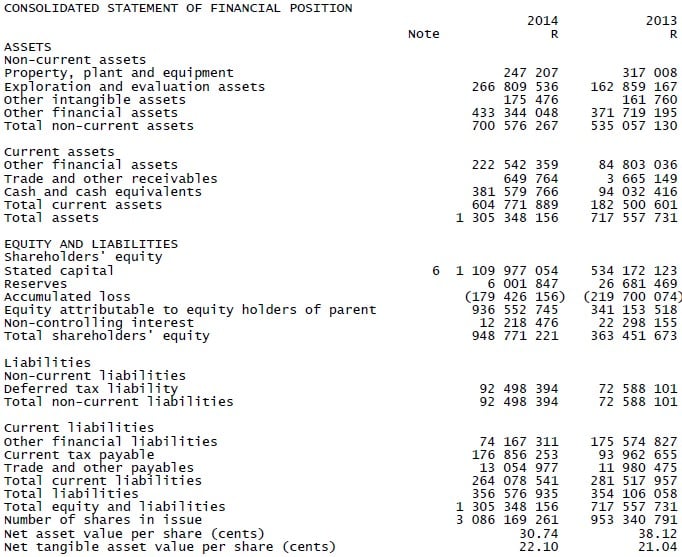 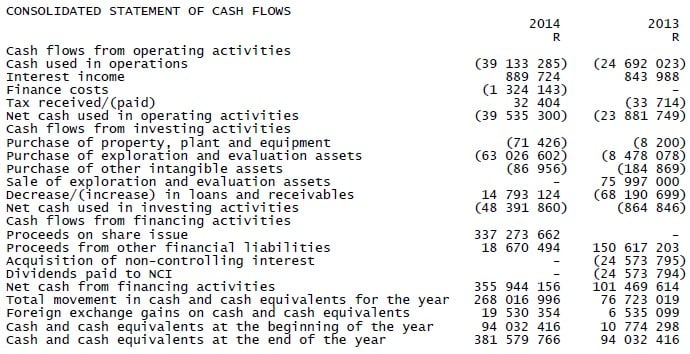 The Group has adopted the following new standards and amendments to standards, including any consequential amendments to other standards: IFRS 10 – Consolidated Financial Statements, IFRS 11 – Joint Arrangements, IFRS – 12 Disclosure of Interests in Other Entities, IFRS 13 – Fair Value Measurement, and Presentation of other comprehensive income (Amendments to IAS 1). Application of these standards has not had a material impact on the measurement of assets and liabilities of the Group, but has resulted in additional disclosures.

These consolidated annual financial statements have been prepared on a going concern basis.

All monetary information is presented in the functional currency of the Company, being South African Rand.

The Group annual financial statements are the responsibility of the directors of the Company. They have been prepared under the supervision of Tariro Mudzimuirema CA (SA). These financial statements have been audited by Ernst & Young Inc., the Group’s auditors. The unqualified audit report includes an emphasis of matter paragraph, which refers to the directors’ disclosure in note 9 which indicates conditions which give rise to a material uncertainty which may cast significant doubt on the Company’s ability to continue as a going concern. The audit report is available for inspection at the Company’s registered office and is available in the integrated annual report, which is available on the Company’s website.

The Group operates in five geographical locations, which form the basis of the information evaluated by the Group’s chief decision-maker. For management purposes the Group is organised and analysed by these locations. These locations are: South Africa, Nigeria, DRC, Botswana and Malawi. Operations in South Africa relate to the general management, financing and administration of the Group. 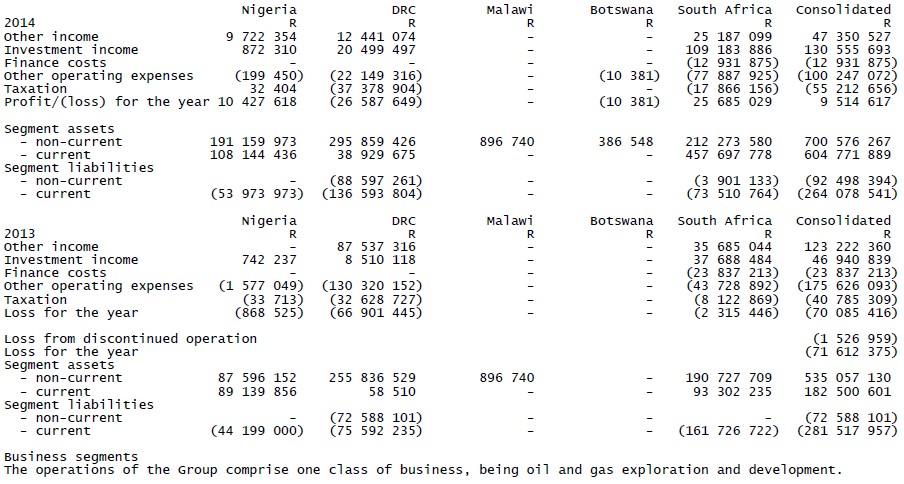 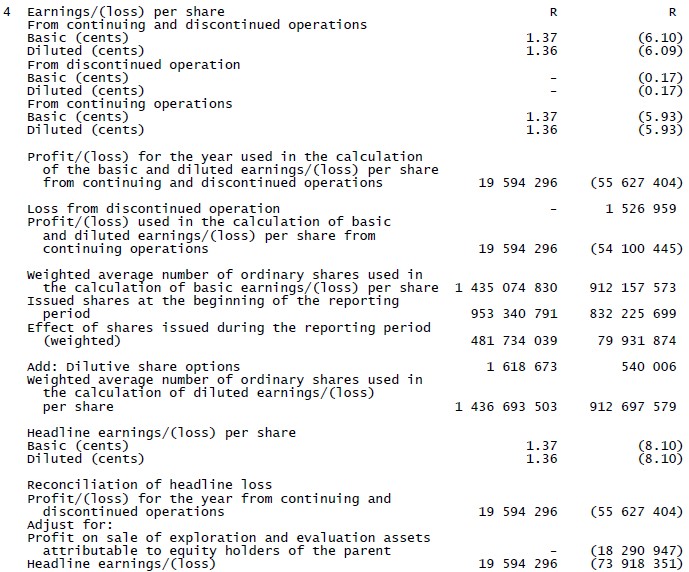 The farm-in agreement between Semliki and Total provides for a carry of costs by Total on behalf of Semliki. Total will be entitled to recover these costs, being Semliki’s share of the production costs on Block III, plus interest, from future oil revenues. The contingency becomes probable when production of oil commences and will be raised in full at that point. At 28 February 2014 Total has incurred R36.5 million (2013: R20.4 million) of costs on behalf of Semliki. Should this liability be recognised, a corresponding increase in assets will be recognised, which, together with existing exploration and evaluation assets, will be recognised as development infrastructure assets.

The Board has resolved not to declare any dividends to shareholders for the period under review.

The planned recapitalisation of the Company, as previously announced to shareholders, was completed in January 2014. The Company converted all the Gairloch loans into equity and is now debt free. Furthermore, the Company raised R336.6 million from the R570 million Rights Offer, which will enable the Group to fund its operations for the foreseeable future. Although the above transactions were a success a deficit of R90 million remains in the Group’s projected cash flows to June 2015, which is indicative of part of the shortfall from the Rights Offer. To manage the Group’s non-performance risk in funding its assets and commitments, management is in early-stage discussions with financial institutions regarding the raising of equity and debt funding to eliminate or manage the deficit. The likelihood of success of this initiative remains uncertain at this stage.

The cash flow projections to June 2015 also include cash inflows from EERNL totalling R189.8 million (US$17.9 million). The loan owed to SacOil remains overdue since 31 May 2013. EERNL has requested a further extension of the loan to July 2014 whilst it undergoes its own recapitalisation, which will enable it to settle in full the amounts owed to SacOil. It is difficult to determine with certainty the outcome of the planned recapitalisation and, consequently, the settlement of the loan owed to SacOil. The Board continues to assess the benefit of enforcing the security provided by EERNL, being EERNL’s shares in its subsidiary EER 233 Nigeria Limited which owns a 20% interest in OPL 233.

The above conditions give rise to material uncertainties which may cast significant doubt about the Company’s ability to continue as a going concern, and therefore that it may be unable to realise its assets and discharge its liabilities in the normal course of business. The Board remains reasonably confident that it will manage the material uncertainties that exist, as such the financial statements have been prepared on the basis of accounting policies applicable to a going concern. This basis presumes that funds will be available to finance future operations and that the realisation of assets and settlement of liabilities, contingent obligations and commitments will occur in the ordinary course of business.

10 Events after the reporting period

The following event took place from the period 1 March 2014 to the date of this report.

On 31 March 2014, the Company, the Public Investment Corporation (SOC) Limited (“PIC”) and the Instituto De Gestao Das Participacoes Do Estado (“IGEPE”) entered into a Memorandum of Understanding (“MoU”) intended to regulate the relationship between the parties with regard to:

Importantly, both the ARP and GPP are long-term projects, and are subject to, amongst other matters, feasibility studies, front-end engineering design, detail engineering, market analysis, social impact studies, the conclusion of joint venture agreements by 30 July 2014 or such later date as agreed to in writing by the parties, and the raising of the funding required for the projects. The feasibility studies are subject to the approval of the Boards of directors of each of the PIC and SacOil and satisfaction of any other applicable approval processes of these parties.

On 10 March 2014, Transfer Holdings (Proprietary) Limited became a wholly-owned subsidiary of SacOil following the acquisition of a further thirty per cent (30%) interest. On 2 May 2014 Transnational Corporation of Nigeria PLC (“Transcorp”) and the Nigerian National Petroleum Corporation signed the Production-sharing Contract forOPL 281. Transcorp, as operator of OPL 281, will now proceed to prepare and lodgean application to seek the approval of the Nigerian Government for Transcorp to assign a 20% participating interest to SacOil’s wholly-owned subsidiary,SacOil 281 Nigeria Limited.

By order of the Board

IMPORTANT NOTICE TO SHAREHOLDERS REGARDING THEIR SHARES

Shareholders are advised to contact their CSDP, broker or professional advisor if they are in doubt as to what action to take, and to visit our FAQ page

If you are in any doubt as to what action you should take, consult your CSDP, Broker, Banker, Legal Adviser, Accountant or other professional advisers immediately.

Or visit our Shareholder Information page for more information regarding your shareholding and share certificate.